David Graeber's Thoughts on an Occupation 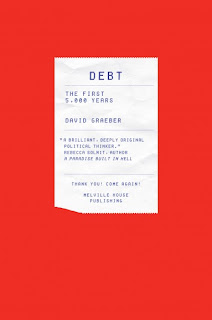 Yesterday I finally had the chance to hear David Graeber speak. The author of Debt: The First 5,000 Years, Graeber is credited with being one of the architects of the consensus decision making at the heart of the Occupy Wall Street movement. I had hoped his talk at Bertell Ollman's Friday afternoon seminar would focus on Debt, as I'd been hankering for some sort of in-person Cliff Notes for the hefty volume that arrived, appropriately enough, under the Christmas tree two months back.

Instead Graeber focused on the rise of Occupy Wall Street, a decision that did not disappoint.  His talk revolved around the question of why this movement has caught the attention of the media and the imagination of the nation when other social movements of the past thirty years were largely ignored.

In answer to this question, he offered a series of possibilities: of course there is the advent of social media and the indignation that follows the immediate webcasts of police brutality. And there is the internationalization of the mass media, so that the earliest reports of OWS were carried by Al Jazeera, and in the Dutch, German, British and Japanese media, leaving the usually conservative American media compelled to cover the movement simply by force of peer pressure. A member of the seminar-sized audience reminded the group that the September 17th events had nearly perfect timing, coming as they did after the infuriating summer of 2011 where the U.S. Congress frittered away the possibility of a jobs bill while debating the increase in the debt ceiling and daring the financial industry to lower the government's credit rating (thereby, of course, dramatically increasing the debt due to increased interest rates.) Americans could not have been more disgusted with their representatives in that moment of rising unemployment rates and congressional stonewalling. The people were primed for someone, somewhere, to fight back against the forces of financialization and congressional intransigence.

But the most provocative idea from Graeber's freewheeling talk stemmed from his analysis of the content on the We Are the 99 Percent tumblr blog, where photos and text tell the stories of hundreds of indebted and unemployed, under-employed, or minimum-wage Americans who share a photograph of themselves with a note detailing their dire economic circumstances. Graeber observed that the preponderance of people posting on this site are women, and that among the men who have posted, most are either in the traditional helping professions of teaching or healthcare, or they are war veterans (our version of caring, mission-driven work for working class men).

He went on to argue that the indignation that the Occupy movement tapped in to comes from a sense of moral outrage that goes something like this: I've followed the rules, I've done everything the society expects of me (worked hard, studied hard, gone to college, shouldered student and mortgage debt), and now, having entered into some caring profession, I have been rendered so indebted that I cannot even take care of my own family. Meanwhile, the folks on Wall Street have plundered and pilfered the economy, and we've been bailing them out.

The depth of this moral outrage, Graeber asserted, stems from a desire to pursue meaningful work that is thwarted by a system that punishes altruism and rewards greed and swindling.

Graeber continued with his analysis, extending it to the culture industry: For the most part, only the wealthy can afford to take up meaningful work, whether caring or creative.  The price of entry for a job in the arts, or the media, or most of the creative professions is a couple of years working as an unpaid intern — living on nothing in one of the most expensive cities in the world. Anyone without parents wealthy enough to support such a career launch is priced out of creative work—shut out of these fields.  This, he argued, explains the resentment of Americans toward what can be easily cast as a privileged intelligentsia in the media, the universities, and elsewhere.

Graeber's talk led me to wonder whether the rise of OWS might be seen, at least in part, as a crisis in the work of care.  Traditionally care had been the unpaid work of women in the home, and to a great extent, it continues to be.  But the move of women into the professional labor force created a gap (this becomes a "second shift" for women who can't afford to buy themselves out of the work of care, but represents a market opportunity for entrepreneurs who find ways to sell in-home care services to those who can afford it.) This shift in how care is provided has created an underclass of low-paid nannies, nursing home staff, and in-home healthcare aids, and, at the same time, has priced most of us out of being able to afford care for ourselves and our families. This situation, in turn, creates a market for new financial instruments such as long-term care insurance. The work of care — the intergenerational debt we owe each other — becomes another site where financiers can step in and capture a percentage.

In Self-Help, Inc: Makeover Culture in American Life, I argued that the self-improvement industry's success is driven by American anxiety about remaining employed or employable, and married or marriageable.  I argued that self-help practices are a form of immaterial labor, where individuals are urged to work on themselves to secure themselves against individual obsolescence and that readers of self-help literature find themselves in a cycle of belaboring themselves in order to remain economically viable. But when work on the self, whether through self-improvement regimens, or through the more traditional respected avenues of higher education, leads only to further immiseration, one has to wonder how long it will be before so many belabored selves seek a new occupation.

Self-Help, Inc: Makeover Culture in American Life is available at booksellers near you or online.
Micki McGee writes about self-improvement culture and other aspects of everyday life.

What We're Reading at Self-Help, Inc.